A year before Monzo—a revolutionary online bank that was going to change the banking industry—launched, only 16% of customers of traditional banks in the UK agreed they had the relationship they wanted with their banks. Monzo used relationship marketing to take advantage of low customer satisfaction, connect with their target audience, and turn their customers into loyal followers.

Monzo used relationship marketing to such great effect that they had three successful rounds of crowdfunding campaigns—once raising £1M in 96 seconds.

Here are the five relationship marketing tactics that Monzo used to build and leverage customer advocacy that boosted their crowdfunding rounds to record-breaking heights.

They Built a Community for Their Customers

Monzo’s main relationship marketing tactic early on was to build a brand community. This brand community fostered customer loyalty and engagement, gave their customers a sense of belonging, and humanized their brand by bringing themselves seemingly closer to their clients.

They started by figuring out on which platforms they could engage their target audience, then built their community using those platforms. They used a company forum, social media platforms, and events to create a group of like-minded individuals who wanted to change the traditional, outdated banking industry in the UK. 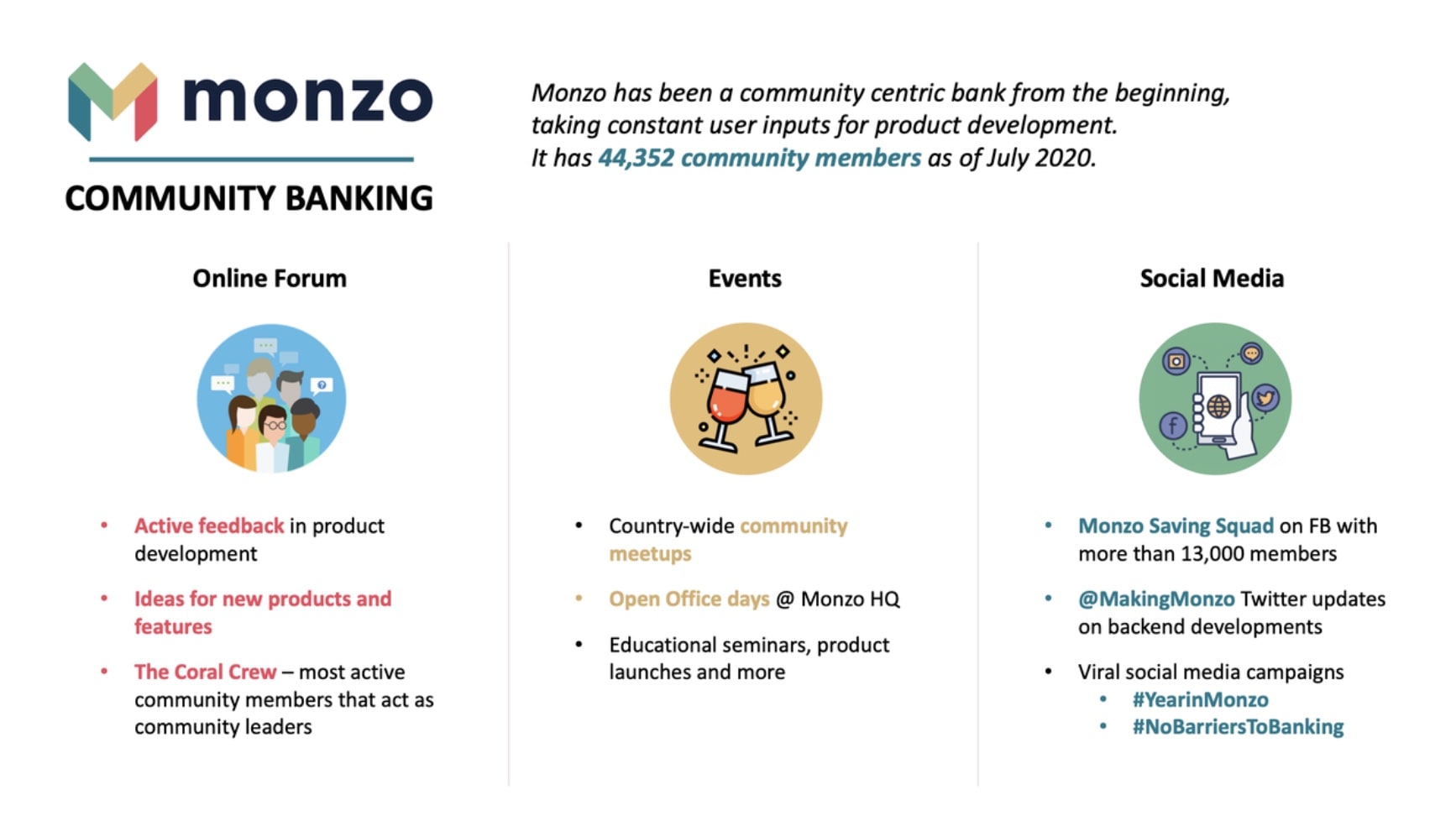 Communities exponentially drive customer engagement—but only if those communities are engaged themselves. So, Monzo’s employees (including their CEO) encouraged conversations and relationship building within the community by regularly participating in forum discussions to solve problems, making announcements, and casually chatting with customers about their suggestions.

Those genuine interactions successfully increased customer engagement at Monzo. And engaged customers are more likely to participate in crowdfunding rounds because they can see how hard the “creator” (in this case, the Monzo team) is working to give them a solution to their problem.

They Included Their Customers in a Rebrand

Apart from using branding to make themselves relatable to their audience, Monzo used their branding as a relationship marketing tactic by involving their customers in their rebrand. That involvement showed customers that they knew how to listen, unlike traditional banks that were known for disregarding their customers’ needs.

[Source] Monzo’s rebrand was led by their customers.

Monzo was originally known as Mondo, but in 2016, a company with a similar name legally challenged them and forced them to rebrand. So Monzo did exactly what traditional banks would never have done—they involved their customers in their rebrand by asking their customers to choose their new name. They received 12,560 suggestions and decided to rebrand to “Monzo” as suggested by six of their customers.

Involving their customers in their rebrand not only showed their target audience that they could listen but also made their customers feel like they were a part of building this great, modern banking solution. And that sense of belonging and inclusion made them want to contribute even more through participation in Monzo’s crowdfunding campaigns.

Expand Your Finserv Customer Base With Referral Marketing

The Finserv market is growing at a furious pace. Leverage your advocates to capture new clients and drive more growth.

They Built Trust Through Radical Transparency

Monzo launched during a time when consumer trust in traditional banking and financial services was at an all-time low—only 37% of consumers in the UK trusted banks. The main reason for that distrust was a lack of transparency.

The Monzo team built trust in their brand through radical transparency by interacting with customers publicly on social media and in forums. This, in turn, built trust with both the customers they were helping and those who could see the interaction.

They started moving toward radical transparency by building a transparency roadmap. They also built a transparency dashboard so that customers could find whatever information they wanted, including performance reports and new features in the beta testing stage. 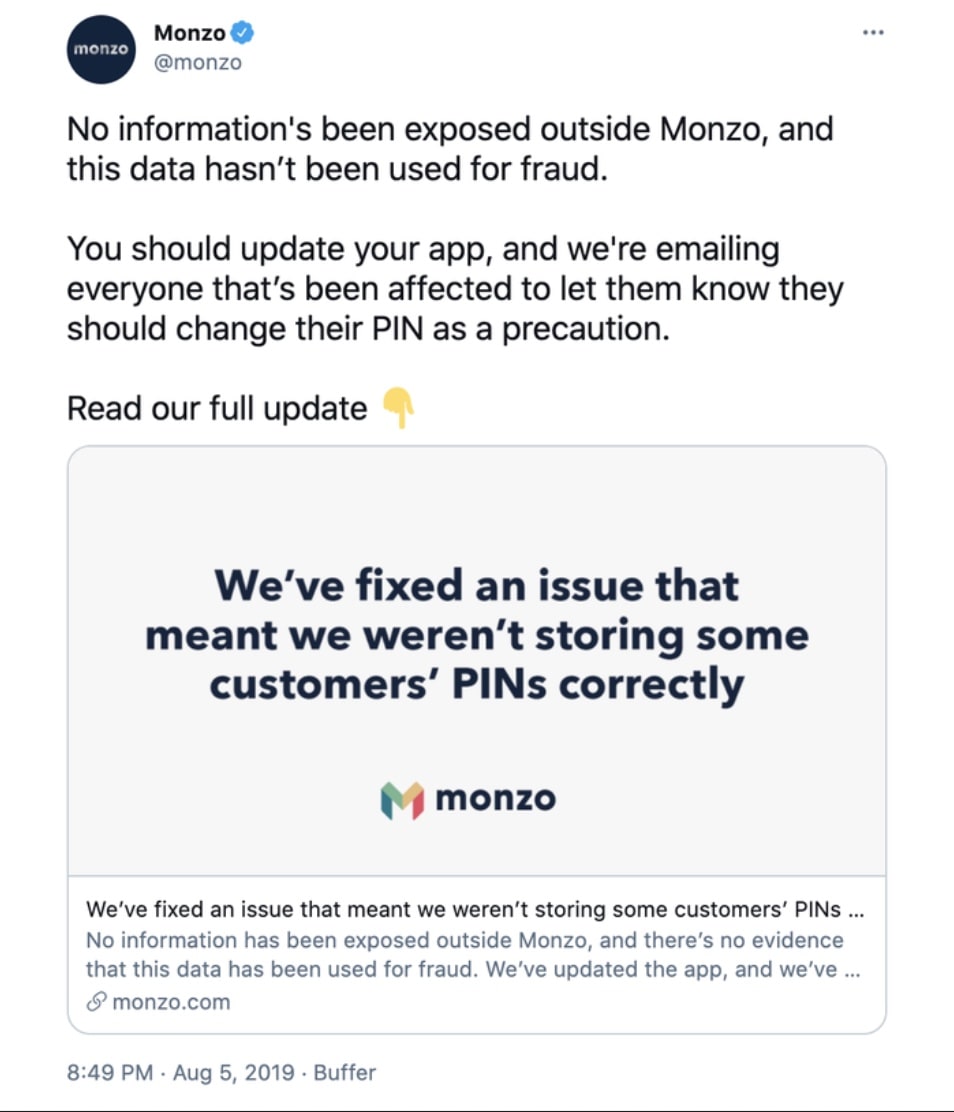 [source] Monzo announced on Twitter that they were storing PINs incorrectly.

In addition to providing easily accessible information, Monzo also made sure to let their customers know exactly what was happening. In 2019, when Monzo found a bug that meant they weren’t storing customers’ PINs correctly, they made the announcement right away and took ownership of the entire mishap. They continue to tell their customers about bugs and issues through a Twitter page called Monzo Status.

[source] Monzo’s customers still trusted them—despite the PIN storage hiccup—because they told customers exactly what had happened and how it affected them.

This radical transparency built social trust, as proven by the fact that negative sentiment around the brand only lasted for about a month after they announced that they had been storing PINs incorrectly. That social trust helped Monzo successfully crowdfund by de-risking the “reward” (i.e., Monzo’s continued operation). 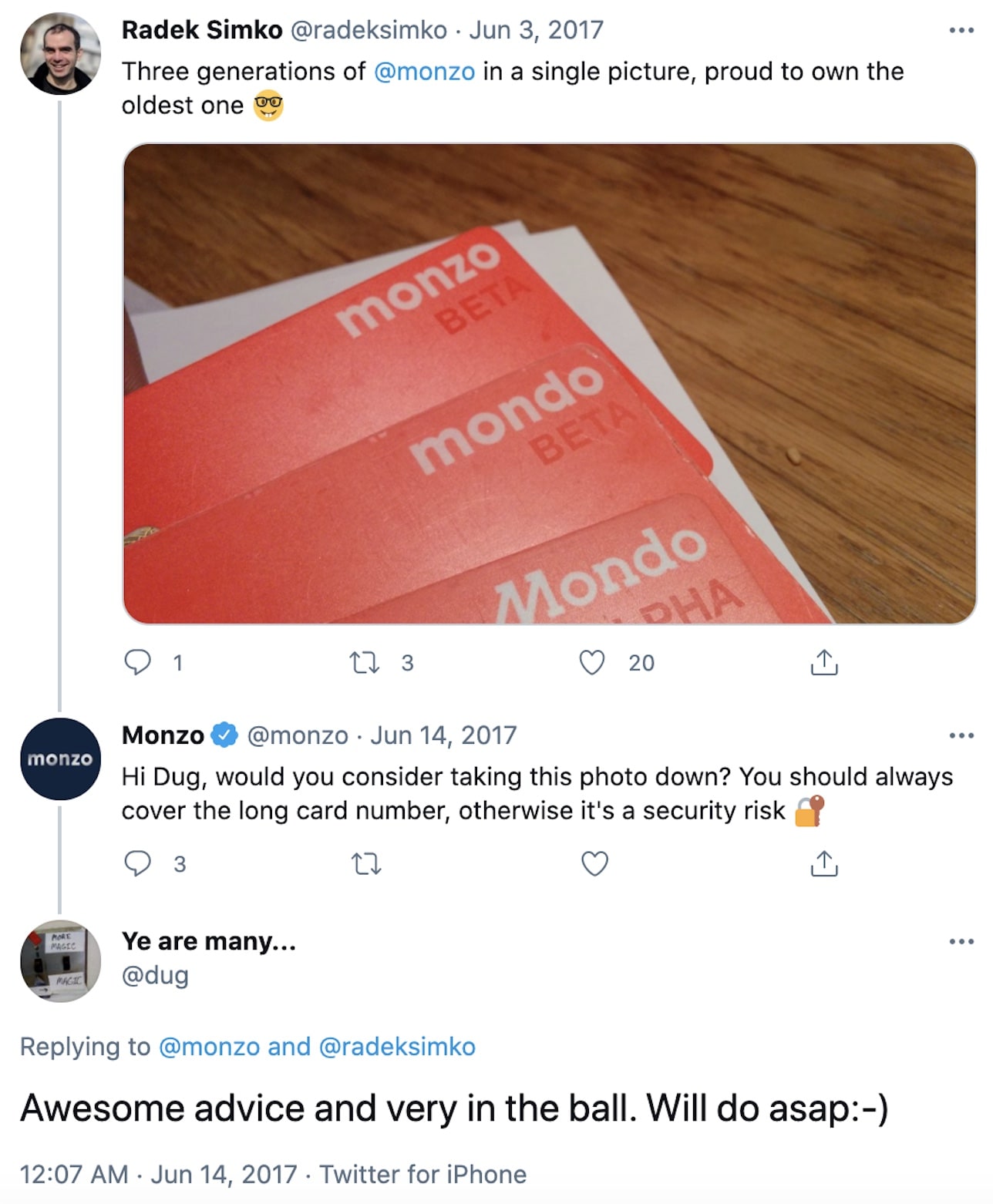 [source] Dug (third commenter) deleted his tweet containing a photo of his card number because of a prompt from Monzo’s customer support team.

They used a social listening application to monitor conversations around their brand and provided support where they could. For example, when customers posted photos of their credit cards, they were quick to remind users to be mindful of privacy and security best practices (like hiding the 16-digit card number).

Their excellent customer service helped them build great long-term relationships because it showed their customer-first mentality. That proactive customer service, in turn, boosted their crowdfunding rounds.

They Set Up a Referral Program

Monzo set up a referral program to encourage their customers to talk to them, build relationships with new customers on their behalf, and, ultimately, increase customer loyalty (which increased crowdfunding success).

Monzo built their first referral program before they launched to build hype and instill a fear of missing out (FOMO). They established a waiting list for their beta launch, and customers who referred friends got bumped higher up the waiting list. Customers and referrals saw where they were in the queue right in the Monzo application, gamifying the experience. When Monzo released their beta launch, they had over 200,000 people hoping to get selected as beta testers—but only a handful of them got in. They took inspiration for this waitlist-style referral program from Robinhood, another fintech company with an interesting referral marketing story.

After the initial beta launch, they distributed “golden tickets” to their customers. An existing customer could send their golden ticket to a friend, and that friend could skip the waitlist and get instant access to the Monzo app. This tactic worked especially well at building customer loyalty because referred customers are 18% more loyal than non-referred customers. Not to mention, the biggest driver of trust in the fintech industry is an endorsement from family and friends.

By the time Monzo set up their first crowdfunding round, their word-of-mouth marketing had already built them a large and loyal customer base that wanted to contribute to their growth.

Monzo Used Relationship Marketing to Kickstart and Sustain Growth—You Can, Too

Monzo’s relationship marketing strategy was so successful at building customer loyalty and advocacy that they raised €23,378,100 from crowdfunding. Relationship marketing is about the connection you establish with your clients. Make your connection one of mutual respect, and you’ll have laid the foundation for turning customers into brand advocates.

Learn how you can easily boost word-of-mouth marketing with our referral marketing platform by booking a demo today.