WOM Marketing: A Guide to Harnessing Word of Mouth

Extole|Advocacy|Blog|WOM Marketing: A Guide to Harnessing Word of Mouth

Consumers are bombarded by ads all day, every day. On websites, TV, and buses and billboards as they drive to work. Even social media is flooded with ads and branded content. With so much advertising noise, people start to tune it all out.

Word of mouth(WOM) is your way back into the consumer’s consciousness. WOM marketing, sometimes called WOMM, is less expensive than traditional ad spending, but significantly more effective. Studies show that 92% of consumers trust their friends and family more than they trust advertisers.

Brands that understand the underlying dynamics of WOM (i.e., why we share) are creating armies of advocates—and mountains of revenue in the process. We’ll tell you what you need to know to tap into WOM and make your customers your best marketers.

The History of WOM Marketing: Then and Now

Word of mouth marketing is when customers share information about a product or service they love with their friends or family. While WOM has existed since the beginning of time, the mass adoption of the Internet and adjacent technologies has supercharged the scale at which we’re able to share and interact.

A psychologist named George Silverman is most commonly attributed as the pioneer in the field of WOMM. He noticed an interesting phenomenon where skeptics’ opinions of a drug were swayed with a positive endorsement from one or two of their peers. The phenomenon was so powerful that even ex-prescribers—ones who’d had negative experiences with a drug—were noted to change their minds following a positive review of the same drug from their peers. This is WOM in action.

Whether Apple’s products can be considered “drugs” or not is a matter of opinion, but one thing’s for sure: Apple understands the WOM machine, and they’re able to manipulate it better than anyone else. Take the iPad, for example. Originally released in 2010, we were introduced to a product that most of us never even knew we “needed.” Nearly a decade later, Apple sells close to 50 million iPads a year. Even as other tablet solutions crowd the market, Apple manages to dominate sales.

What accounts for these astronomical sales and the buzz that surrounds every new generation of iWidget? If you guessed WOM, you’re right. Through a series of calculated pre-announcements, “leaks,” and even controversy, Apple consistently creates a tidal wave of speculation and hype around impending releases. By letting their legions of fans spread the news and build anticipation around a product, they’re able to generate interest organically.

Apple may be one of the biggest corporations on the planet, but even the smallest business can harness WOMM to build their profile and boost sales.

Research has consistently shown that consumers view WOM as more trustworthy than traditional promotion methods. When consumers have faith that they’re getting the whole, unbiased story from a friend or an influencer not affiliated with a brand, they’re much more inclined to make a purchase.

It’s virtually impossible for a brand to duplicate this level of credibility on their own, because, as consumers, we are conditioned to be skeptical of advertising. It’s ingrained in our psyche that a business will always be most concerned with one thing: selling more.

Compared to advertising, WOM marketing is organic, which means that when someone promotes a brand, product, service, or event, they’re doing so because they’re genuinely passionate about whatever they’re endorsing. Savvy marketers understand this mindset and, rather than awkwardly force their message on skeptical consumers, take steps to encourage  and amplify their customers’ positive sentiments.

How can you generate WOM activity around your brand? As you might imagine, positive buzz starts with quality products, services, and customer experiences that create conversation organically. That said, you don’t have to wait for WOM to happen organically. There are several you can take to proactively stoke the WOM fire:

The messaging on your website and in your advertising materials informs how your customers speak about you. Figure out the unique attributes of your product or service, and reinforce those points through organic and paid mediums to give your potential advocates a list of talking points they can use when they talk to their friends and family.

What kind of message should you put out there? The most obvious one is that your product is better, faster, or stronger than the competition. That may be true, but it’s not compelling. If you can highlight something unique or surprising about your business, that’s more likely to garner interest and shares.

Warby Parker is an example of a company that leveraged their unique value proposition (you can try on glasses at home) into an extensive word of mouth campaign. Home try-on  is the characteristic they emphasize in their promotional materials, and it’s the one that customers are most likely to tell their friends about. It’s been very successful for them—50% of the company’s sales are the result of word of mouth.

Highlight what makes you unique from the competition, and drive that point home every chance you get.

2. BE WHERE YOUR CUSTOMERS ARE

Social networks are where the majority of thoughts, feelings, and ideas around brands are shared. They’re also where you’re best equipped to add to the conversation.

Figure out where your customers are spending their time and establish a presence there. Don’t push your products too hard, or you’ll come across as salesy. Instead, provide engaging content (new products, deals, etc.), service to those who need support, and experiences (contests, games, etc.) that your audience will value.

3. TURN YOUR REVIEWERS INTO ADVOCATES

Product reviews are a great way to add a level of honesty and transparency to your sales process. They’re also great for identifying potential brand advocates.  Customers who leave stellar reviews already love your product and are willing to create content about it.

Reach out to reviewers who consistently leave glowing reviews. Build the relationship by offering discounts or special product releases or inviting them to join your referral program. It can take some time to cultivate a relationship with these customers, but they may become your most loyal evangelists. 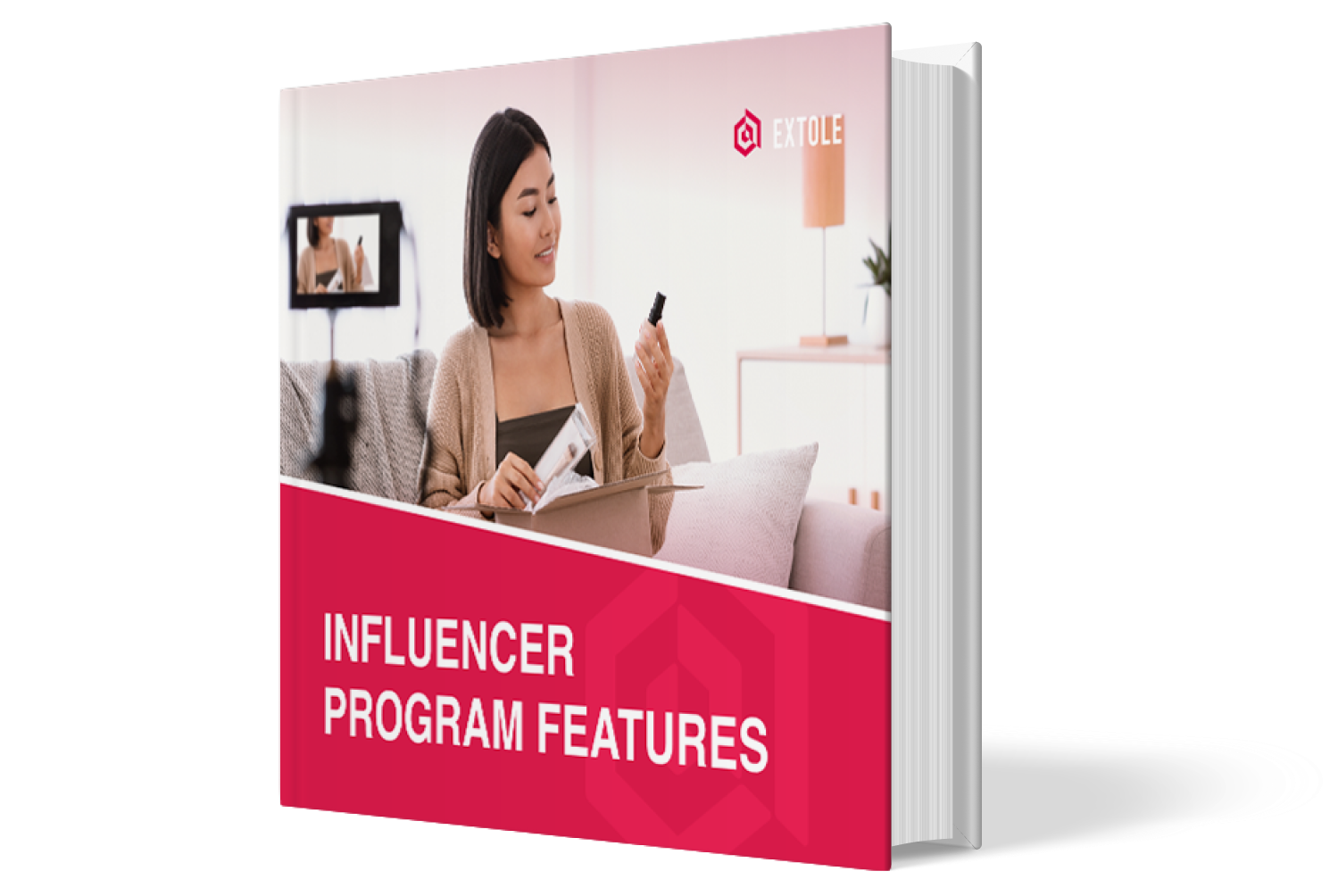 User-generated content (UGC)  on social media is WOM in action. Find ways to encourage and reward customers for creating social media posts about your brand. 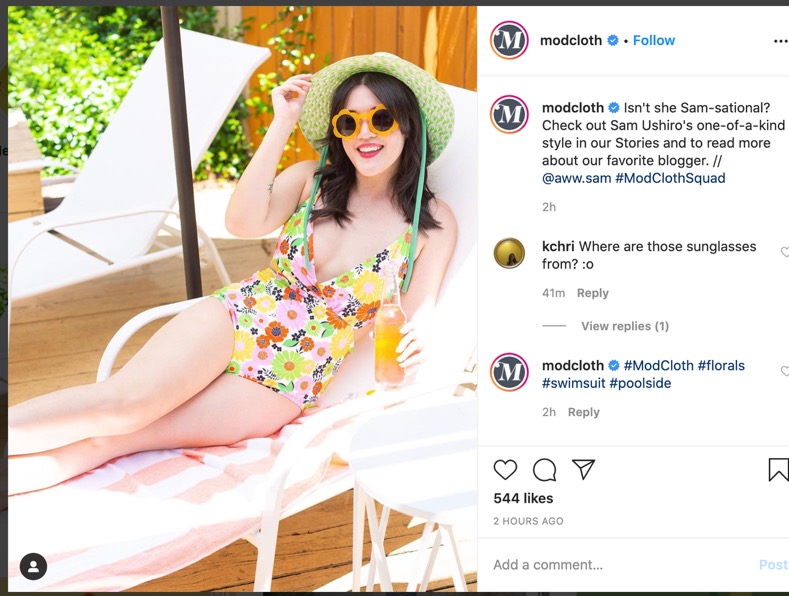 Create a branded hashtag and encourage customers to share how they use your products or services. Highlight your favorite examples—like Modcloth did in this Instagram post where they highlighted a member of their #modclothsquad.

Encourage positive sentiment by identifying your biggest advocates and thanking them for their support. The simple act of acknowledgment can go a long way to create a brand experience worthy of sharing.

To amplify your advocacy program, create an influencer “group” with access to first looks, exclusive deals, referral offers, and feedback programs. By connecting with your top advocates, they’ll feel more connected to your brand, continue to spread the good word, and, in many cases, become a customer for life.

5 Examples of WOM in Action

Now that you understand the principles behind WOM marketing, let’s take a look at some real-world examples. These five companies have all managed to harness WOM by making it easy and exciting for advocates to recommend their brands.

Lull prominently displays a “refer a friend” button on their site. A simple click leads to their referral program where customers can give their friends a $150 mattress discount and receive $50 themselves. 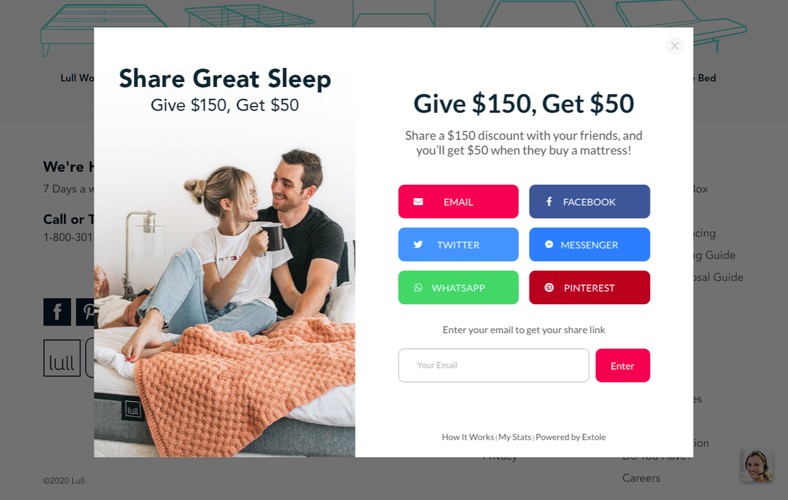 Through this referral system, they’ve boosted their advocate program numbers by 53%.  For every 100 new advocates, they net nine new friend conversions. Of those new customers, 7% elect to participate in the referral program, so the WOM effect continues to spread.

The women’s accessory brand Accessorize curates Instagram photos of customers wearing their products in their everyday lives.  Fans can submit their content to be featured by using the hashtag #accessorizer. The promise of being featured on the website is an incentive that encourages fans to create content featuring the retailer’s products. 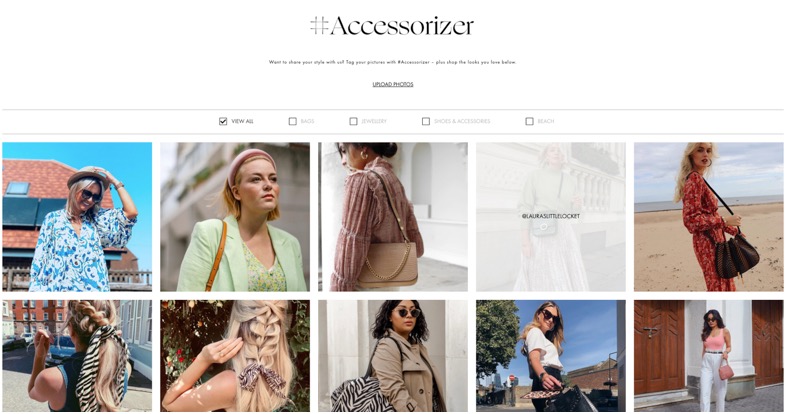 A case study revealed that this tactic increased conversion rate by 65%, time on-site by 150%, and the average order value by 33%.

The apparel company Untuckit built an army of brand advocates by encouraging customers to leave reviews and upload photos of themselves wearing Untuckit’s shirts. 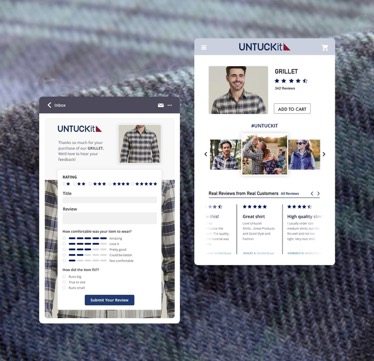 The customer-submitted photos  are more persuasive than the brand’s own content: The retailer reported a 20% higher conversion rate  for shoppers who engaged with customer photos.

Alo Yoga also harnesses the power of user-generated content with an “Inspo” tab on their website that features real customers wearing their clothes on Instagram. Customers can click on the photos to add those apparel items to their shopping cart.

They found that these “shoppable photos” led to a 107% increase in average order value and a 60% increase in time on site. Additionally, visitors who interacted with the images were 293% more likely to return to the site.

Lush creates stunningly colorful bath and body products that are just begging to be photographed. They often have more than 500,000 posts on their branded hashtags each month. Lush cultivates a strong social media presence, which allows them to interact with their fan base and encourage organic content creation. 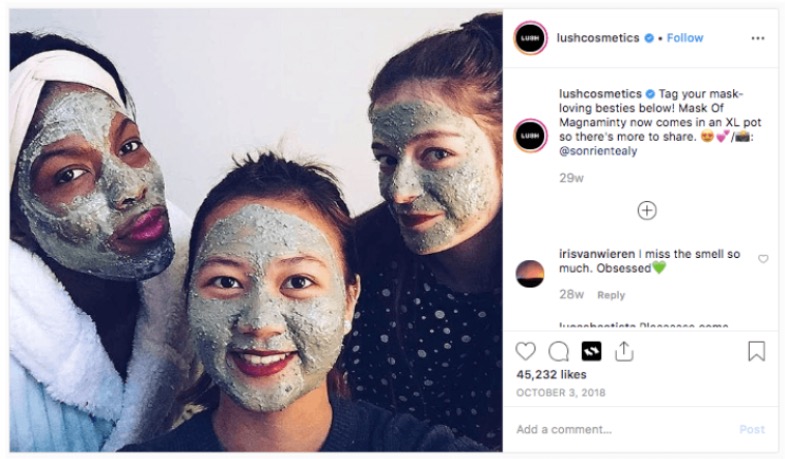 Lush found that UGC has a 1,340% higher total reach on Instagram than traditional branded content. By encouraging customers with even tiny followings to talk about their products, they saw 183% more new profiles reached, 53% higher clicks, and 43% greater traffic to their site.

You Can’t Force Word of Mouth, but You Can Encourage It

If WOM marketing were easy, there would be no need for traditional advertising at all. In reality, a strong WOM strategy is rooted in creating a quality product or service that your customers are proud to recommend to their friends and families.  You’ll need to start by building brand loyalty through a great customer experience, a stellar product, and excellent service.